Putting "Role" back into "Role-Playing"

"We play dungeons, not characters". I read this slogan and found it quite funny and smart. It says a lot about the need many of us felt to go back to our roots, before games became too verbose and complicated. I fear, though, that some may take it too literally.

If you start this hobby thinking you're going to play some kind of tactical skirmish game set inside a fantasy dungeon, with added gestional elements, you might want to grab a copy of Heroquest, or one of his too many spawns. Think about it: you're into something that is called "Role-Playing". I guess "Role" must play a pretty important part in the show ... say: at least 50%?

I've been into a heavy storytelling for a long time and I'm the first to admit that it can get very frustrating and emotionally stressing. It's difficult for the gamemaster to prepare, relies on a generous dose of wild improvisation and suffers from a lack of real decision making for the players, because, you know ... if the story is so important usually it must go in a precise direction, whatever the players do. That is called "railroading" and if everyone agrees about its necessary evil it can be fun. We had fun with it. We played characters, not dungeons. We staged entire fictional lives. 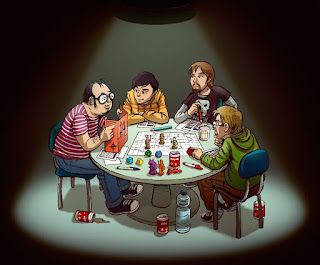 In these days, playing AD&D 1st edition, in its Astonishing Swordsmen and Sorcerers of Hyperborea incarnation, I'm looking at simplicity and fun. This doesn't mean that I renounced playing NPCs or that my players have blank stereotypes instead of PCs. Things can be done with measure. Balance is the mother of success (and good fun).

Too often I see groups playing like many of us did at the very start of the hobby: using only the third person. So, here's my dime on how to put the role back into role-playing, with little or no effort:

The best hing? We can have dungeons and characters and be very happy about them all.
Pubblicato da Adamo Dagradi a 02:48