The Vermin Menagerie #2: the Cobbleroach

It took millennia for the Cobbleroach to adapt to the city environment. And adapt he did, to the point of becoming virtually invisible to the eyes of his predators.
Covered by a cubic mass of chitinous exoskeleton (which opens to let it use its wings) capable of being stepped-on by foot, hoof or cartwheel, the Cobbleroach mimics cobblestones, positioning himself to rest where one is missing or displaced. Streets in particular disrepair may attract a multitude of the creatures, spending the day in disguise and moving during the night in search of prey. 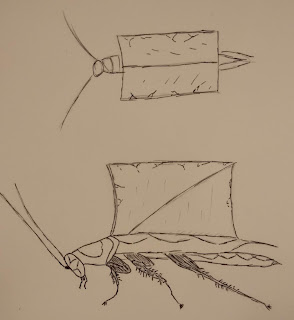 Cobbleroaches hunt in swarms of 5-50 (5d10) individuals and are carnivorous, their diet being composed of lizards, rats, cats, small dogs and, occasionally, drunkards sleeping in secluded alleys.

What is left looks like the victim of a Piranha attack but Cobbleroaches are way slower to chew their prey, so it must be relatively small or utterly helpless. If the sleeping homeless wakes up and proves to have a fight in him the roaches reaction very much depends on their number. But beware: their clicking call can summon 5 - 50 other fellow chewers in 1d12 rounds.  Desperate yelping or meowing at night might mean some stray or pet is being chased and eaten alive.

Cobbleroaches are quite helpless during the day, their predators are mainly cats and dogs, able to sniff them and use their paws to dislocate the insect and overturn it.

Cobblepickers are industrious individuals who roam the city armed with 4 feet long batons that end with some homemade iron point, they patiently test loose or suspicious cobblestones and, if they turn out to be vermin, skewer them. City authorities pay 25cp per insect killed and use their exoskeletons to manifacture inserts for leather armor.